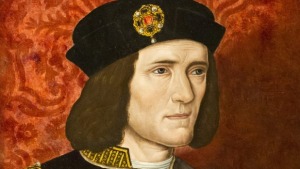 So Richard is finally being buried with dignity! An amazing story. After visiting Leicester last year, where his body had been found stuffed into a hole and subsequently covered over with a car park! – I wrote this poem. Sadly, wordpress does not seem to be overly respectful of indentations – but you’ll get the general idea:

Richard III, the last Plantagenet King, was killed by the forces of Henry Tudor at the Battle of Bosworth Field in 1485. His remains were identified beneath the site of the former Greyfriars in Leicester, 2013.

it comes to this:

so that your outraged man’s body

stripped to skin and gape and clotted blood

half sits, half lies,

on this final throne:

Vaunted trophy of that frantic field –

its wild viscera of axe and heavy sword

the sweated force of body slammed on human body –

into the collapsing cradle of your lap,

in the musty dark:

a sedimentation of bone and mud,

metamorphosis of soil and time and

the still far away ribbon